Native to the Blackfoot Kainai/ Blood Tribe in Southern Alberta, Pablo was raised by his grandparents who lived a traditional life, where the oral tradition of sharing stories was vital to growth, belonging and cultural preservation. Pablo has pledged his life in service to theses ways, spreading deep and simple truths that cut through the modern haze for people all over the world. Pablo has a remarkably broad historical and practical knowledge concerning the Prairie Indians’ original way of life, and like his grandparents he is an excellent storyteller.

As a young man Pablo sundanced 11 years on “The Poor Man’s Sundance” lead by Morris Crow, Last Tail Feathers. He continued his apprenticeship in the sundance ways with his teacher and later received the rights to run his own Sun Dance, “Path of the Buffalo Sundance”  which is still held every summer in Southern Alberta. 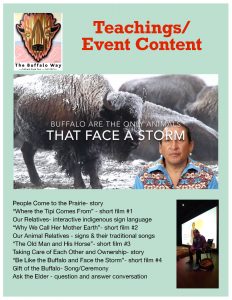 In 1991, after a 76 year ceremonial ban, Pablo was the first to return to vision quest at Writing-On-Stone. It was there that the Buffalo came to Pablo in a powerful way and said to him “Go and teach my children to be like me.”  This purpose in life has taken Pablo across the ocean spreading the message of the buffalo and its medicine of strength, perseverance, ownership and walking into life’s challenges head-on.

Following the Buffalo from his vision quest, Pablo spent 18 years teaching in Europe before he came back home to help his people in a variety of roles including support worker for the Indian Residential School, IRS Elder with Treaty 7 Management Corp., spiritual counsellor at the Elbow River Healing Lodge, a unique Alberta Health Services facility dedicated to Indigenous people and a Native coordinator at the Calgary Remand Centre. “All healing, all thanks goes to the Creator. He doctors.” says Pablo. 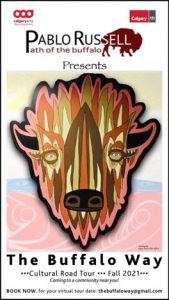 “When I was granted the role of leader in the Sundance, I continued to learn from the Sundance leaders about the “warrior ways”, as well as the “way of the holy pipe”. These teachings are the foundation for understanding the four parts of a human being and ways of centering. My leader followed our oral tradition in teaching the medicine wheel, but he put this knowledge onto a diagram, to support teaching the principles to modern thinking people. After learning for 13 years I was granted the right to teach on my own. My workshops are based on this, and other tools, which have helped many people to see things that they have to correct and take new directions, not only in their lives, but in their work, and to take the steps necessary to improve their quality of life.”

Pablo speaks on platforms in Canada and Europe on the topics of Mental Health, Personal Development, Community Wellness, Traditional Medicines, Healthy Family Systems and Leadership Management sharing indigenous wisdom. He serves on the board of directors for the Historical Society of Alberta, and yearly as an Elder to the International Healers Congress in Munich, Germany. He has been awarded the David Crowchild Award for language and cultural preservation, amongst others and has won several grants to preserve and share his storytelling and oral tradition for the benefit of generations to come.

Pablo’s current project is called “The Buffalo Way”- A Cultural “Virtual” Road Tour presentation for youth and families which is open for community bookings now for Fall 2021 dates.