Alycia Two Bears is a member of the Mistawasis Nêhiyawak First Nation but calls Mohkinstsis home. A mixed blooded iskwew, her mother is a white settler of Swedish descent. She has a background in Education, completing her Bachelor of General Studies and Bachelor of Education at the University of Calgary.

As a Traditional Full Spectrum Birth Worker and Board Member of The Mossbag Project, Every week Alycia creates Moon Time Bags which are handed put on Bear Clan Mohkinstsis Friday night patrols, to support kin who live on the streets. Dignity and care of community has brought together allies and community to support fundraising efforts and receive resources to make care packages that support bleeding bodies; pads, liners, tampons, underwear, chocolate, chapstick and sage smudge are the basics in these bags.

Alycia practices Birthing as Ceremony and supports anybody who uses her services from this perspective. She believe supporting pregnant and Birthing bodies is one of the greatest actions we can embrace to grow a strong, healthy, viable community. Alycia works with Miskanawah to create programming that supports Prenatal and post-partum bodies. As  a mother to five children, she is an advocate for home births, midwives and access to the best birth options for every birthing body.

Raised in the late Sharron Proulx-Turners Sweatlodge, the teachings received in a Two Spirit, female centered and run are near and dear to her heart. The safest place to grow spiritually, particularly as a bisexual woman. Alycia stepped down as Co-Chair in this springs AGM of the newly created Treaty 7 Indigiqueer and Two Spirit Society; Sovereign Spirits but remains an active Circle member. 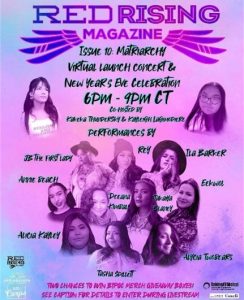 As a Poet, she has earned an Honourable Mention in the 2019/2020 Kemosa Scholarship for Indigenous Mothers in Alberta. As a contributor to the latest Edition of Winnipeg’s Red Rising Magazine’s issue devoted to Matriarchy. Alycia has participated as a poet for

a celebration night of Matriarchy held by Red Rising Magazine.

Alycia has hosted a night of poetry and self care with Red Rising Magazine.

A regular contributor to New Tribe Magazine she has written about colonization, MMIW2S, Two Spirit history, terms, community supports and poetry that accompanies these topics.